Although Havasu Falls is the best-known waterfall along Havasu Creek, Havasu Canyon actually has several major waterfalls and even more smaller cascades and pools for visitors to explore and enjoy. Havasu Creek emerges from fresh water spring close to Supai Village and makes its decent to the Colorado River through Havasu Canyon. Below you’ll find a list of the main waterfalls along Havasu Creek. To plan the best Grand Canyon adventure, learn more about Havasupai Falls trip planning here, including hiking to the waterfalls, camping permits and the Lodge in Supai Village. Read the guide below to learn more about Havasupai's waterfalls, or check out our Havasu Falls map to see all Havasupai destinations and attractions!

The Havasupai Tribe will OPEN Havasu Falls and the Havasupai Reservation to tourists on February 1st 2023. There are no NEW reservations/permits for 2023. Only those reservation holders that were impacted by the COVID tourism suspension have a confirmed reservation. The only way to get a reservation for 2023 is to purchase off the official transfer list.

Named for Havasupai Chief Navajo, this is the first waterfall you will encounter about a mile from the village, and less than half that distance to Havasu Falls and the campground. The original Navajo Falls was removed by a huge flash flood in 2008 that changed the landscape of the Havasu Canyon. On the left side of the main trail a side trail cuts back down to the creek so keep your eyes peeled if you want to get to the base of the waterfall and go for a swim. Most people never see the base of the waterfall, and they are definitely missing out.

Guru Tip: There is a ledge that runs behind the base of the falls so you can walk behind the waterfall!

Fifty Foot Falls is another new waterfall formed in the 2008 flood. This waterfall is a lot easier to spot of the trail and you’ll see a side trail on your left that leads you down to the base of the falls. This is another great spot to swim and an amazing example of how dynamic the Grand Canyon really is.

Another quarter mile from Navajo, a side trail on the right cuts down to the base of Havasu Falls. One of the most photographed waterfalls in the world, Havasu boasts an impressive 100-foot drop. The falls are ever-changing due to their high mineral content of travertine, which is responsible for the breathtaking color of the water and countless pools at their bases. Currently there is one drop at Havasu, but in the past it has been split into two falls. There is ample room around the base for relaxing among the cottonwoods between dips. You can easily access a grassy area to the left of the falls by walking on the edge of the pools.

Twice as high as Havasu, Mooney was called Mother of the Falls by the Havasupai. Only a small percentage of visitors make it to the bottom of Mooney, named for a miner who fell from its wall while trying to rappel to the bottom of the falls. Past the campground, there is a viewing area from where you can descend down the trail. Before you reach the travertine cave you will see signs cautioning hikers to “Proceed with caution” and “Enter at your own risk.” When you emerge from the passage it is best to turn around and climb down ladder style. There is a series of hand grips and chains to aid your descent. The rock is very slick, so take your time and be careful! Once at the bottom, you are rewarded with stunning views of Mooney Falls, which is huge and has quite a large pool area at its base.

This is the last set of falls and it requires an adventurous trek. After Mooney, follow the trail to the left along Havasu Creek for two miles. The trail can be difficult to follow times, but just keep heading downstream. Along the way you will encounter countless pools and smaller falls. There is one swimming hole about a half mile down off to the right with a rope swing. Canyon walls extend to the sky as you walk through fields of wild grape vines. There is some ladder climbing and scrambling involved in this hike. At Beaver Falls, your only option is to jump down or turn back. If you jump down, your three-mile hike will eventually lead you to the confluence of the Colorado River. 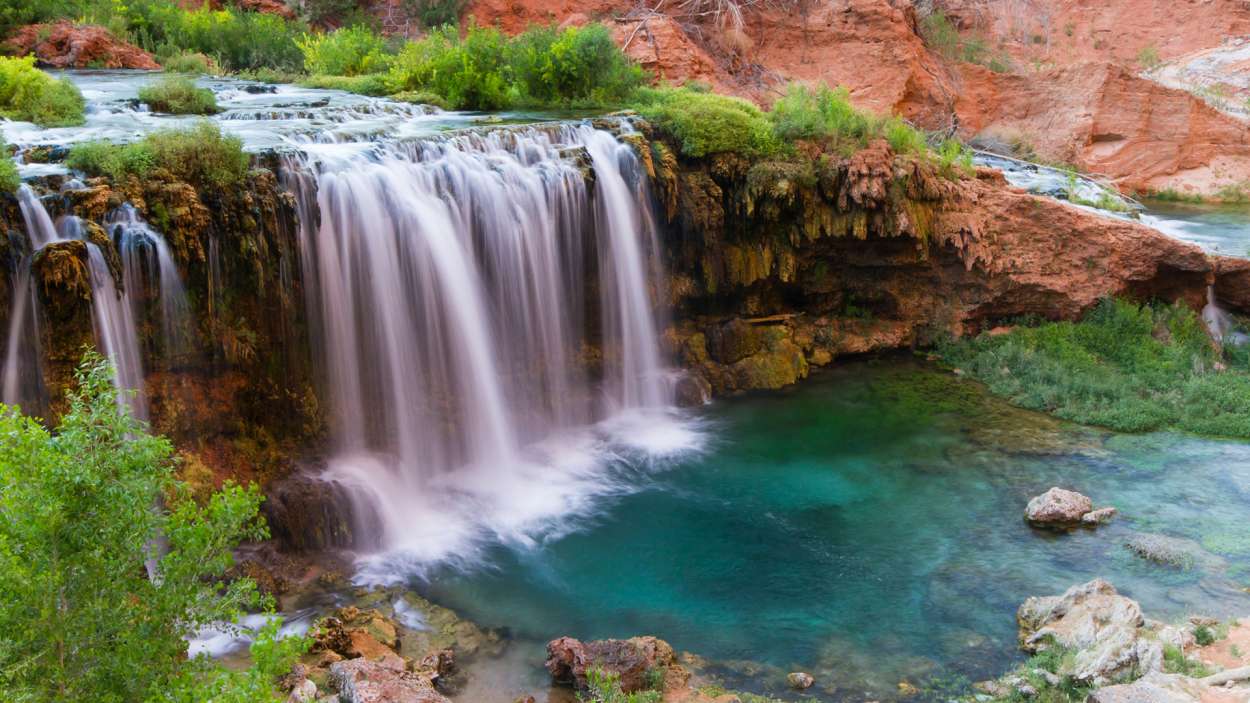 Have our Professional Trip Coaches answer your questions and help you plan a better adventure.

Have our Destination Experts design a hand-crafted private tour for a fully guided Grand Canyon experience.